Actually, I’m back home now, but I was in Italy for most of June and the early part of July 2014, and it was great. This is that story. 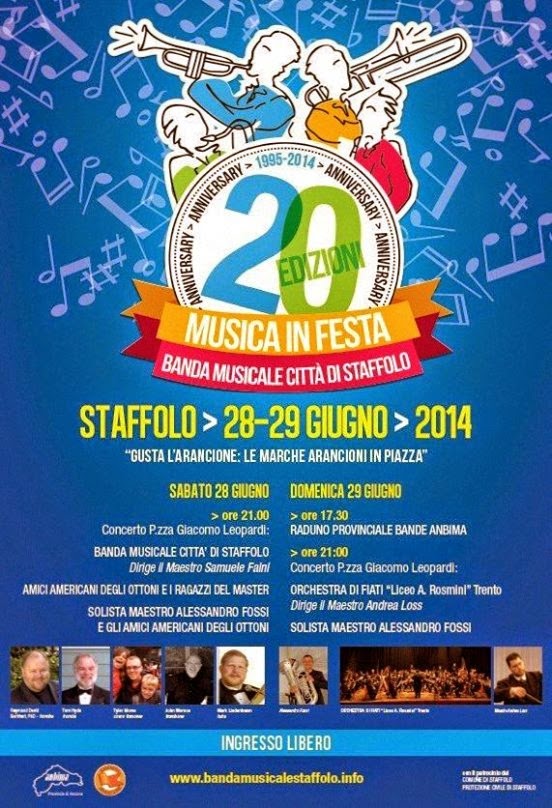 Why
I went to Italy this summer to participate in the 20th Annual Music Festival offered by the Banda Musicale Città di Staffolo (Staffolo City Band). The festival concerts were given in Staffolo’s ancient piazza on June 28 and 29. For two videos from one of our concerts, and videos from other parts of the festival, go HERE.

My friends, Mark Lindenbaum and Margaret Jahn of Bellingham, Washington, recently renovated a farm house [see L’Uliveto Staffolano] near Staffolo that is available to rent for self-catering vacations and which they visit once or twice per year. Given tubist Mark’s love for brass chamber music and his enjoyment of Staffolo, it was only a matter of time before he invited fellow brass players to Staffolo to play chamber music.


But, Mark had larger plans. In recent years he has made friends in the Staffolo City Band. Working with civic and band leaders, a plan was formed to enlarge Staffolo’s annual band music festival to include brass chamber music played by a brass quintet assembled by Mark for the occasion.


Other musical and civic events were scheduled for the festival weekend, including a concert by the Orchestra di Fiati (Wind Orchestra) della Provincia di Vicenza with their featured soloist, Italian tuba virtuoso Alessandro Fossi. The Amici Americani joined Fossi to perform the Concertino da camera for solo tuba and brass quintet by Swedish composer Christer Danielsson (1942-1989). 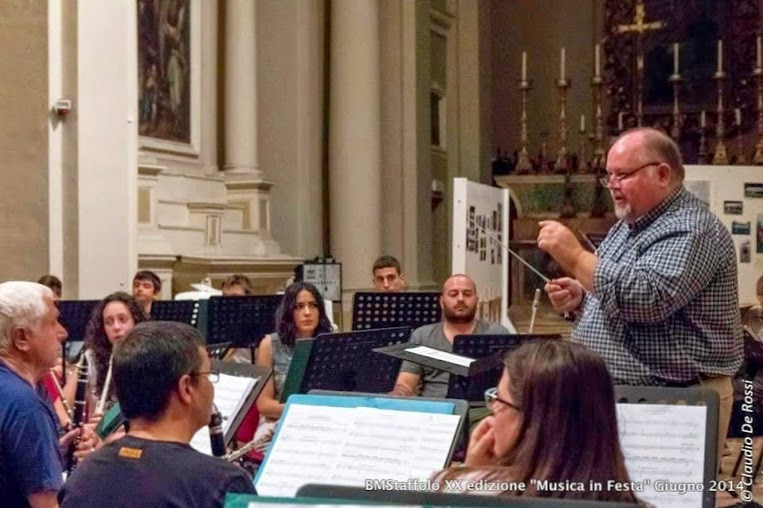 It was a pleasure and an honor to rehearse and perform with the Amici Americani and Alessandro Fossi and to conduct the large brass ensemble and the Staffolo band. 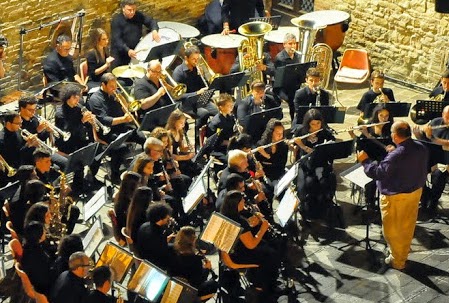 Where
Staffolo is a small town about thirty minutes west of the Adriatic port city of Ancona in the eastern central region of Italy known as Le Marche. [Wikipedia] [Images] Staffolo is considered one of the Best Small Towns in Italy. This video shows many images of the town where I spent one of the best weeks in my life. If you haven’t visited there, I highly recommend it!


Staffolo’s new Mayor, Patrizia Rosini, welcomed the Amici and the guest bands warmly and enthusiastically. She also presided over a formal ceremony recognizing the various participants in the music festival, where she presented me with a book containing important historical Staffolo documents, for which I am most grateful. Patrizia used to play tenor saxophone, so I think the Staffolo City Band has a bright future!


We spent a wonderful week in Staffolo preparing for the two concerts, but one cannot play a brass instrument all day, so the Amici visited nearby sights. At a local Staffolo festival, we heard local musicians, saw costumed children present regional dances, tasted local seafood and olive specialties, and met our first new Staffolo friends. Ciao, Anno! The nearby town of Cupramontana and its morning market supplied tasty cheeses, meats, and vegetables. Half-day trips to the Frasassi caves and the ancient hill town of Gubbio, with its Roman amphitheater, provided geographical and cultural delights. I introduced Tom to granite – Italy's yummy fruit slushes – and we all sought to find the best gelato.


The Staffolo City Band is made up of talented and fun musicians from the Staffolo area and nearby towns. Community bands figure importantly in Italian culture, and the Staffolo City Band appears in concerts and parades in Staffolo and surrounding communities and also travels to perform. Players in the band range from boys and girls in grade school to retired folks, with everything in between! Daily rehearsals with the Staffolo band and its brass players were a highlight of the week.


The Music
The Saturday night concert began with the large brass and percussion ensemble, followed by the Amici Americani brass quintet’s program and the band’s two pieces. Here’s the program (all of my compositions are in print and available for purchase--see links below):

Looking Forward: A New Commission
In relation to my appearance at the 2014 Staffolo Music Festival, Mark Lindenbaum, Margaret Jahn, and John and Meg Monroe have commissioned me to compose a new work for brass quintet based on my experiences in Italy. It is to be a three-movement suite of approximately ten minutes in length, due by summer 2015. I have already begun work. [In late 2014 I complete Ricordi d'Italia, a four-movement suite for brass quintet, based on this trip-adventure.]


From L’Uliveto Staffolano – Mark and Margaret’s beautifully appointed Italian home, which is a very short drive from Staffolo and most of the year is available for long-term, self-catering rental – the views in every direction are simply breathtaking. Twice-weekly market days provide all kinds of local produce and products. Local festivals of music and dance, accompanied by delicious food offerings, occur frequently, at least in summer.


For a break from home cooking and festival food, we visited Staffolo’s Grotto di Frate, a fine restaurant in the city’s ancient wall, for wonderful pizza and local dishes. Many other nearby towns have their own festivals and attractions. We visited Ancona’s sea coast, Gubbio’s historic ducal palace and Roman amphitheater, and the relatively recently discovered caverns of Frasassi. Of course, the best part of any community is its people, and I’m blessed now to have many new friends from among the welcoming people of Staffolo. I would return in a heartbeat. Ciao, amici!


Thanks
Unquestionably, this was a trip of a lifetime for me. I simply cannot fully express my gratitude to all who made this possible, nor can I possibly list everyone who deserves credit. But, I must name a few.


First, my deepest gratitude to Mark Lindenbaum for many years of good friendship and collaboration and the warm hospitality I have always received from him and Margaret. Adding the Amici Americani to the Staffolo Band’s music festival was Mark’s idea, and it was he who brought me on board to play, conduct, and have my music featured at the festival. I also thank the rest of the Amici – Tom Hyde, Tyler Morse, and John Monroe – for their friendship and musicianship over many years and in Staffolo.

Many people worked long hours on the Italian side of things to make this year’s festival the great success that it was. Staffolo Band President Simona Bastari met me at the Jesi train station and deserves much credit. Accompanying her was band Secretary Damiano Cerioni, who is clearly a mover and shaker. He gets things done! And the band is full of hardworking planners and doers, including Vice President Patrizio Bianchi, Second Vice President Massimiliano Scortichini, Stefano Aquilanti, Italo Meschini, Matthia Zepponi, Sofia Sassaroli, Guido Mercanti, and others. The Staffolo City Band’s conductor, Maestro Samuele Faini, was a most gracious and helpful host. Staffolo Mayor Patrizia Rosini’s support was clearly essential. Thank you, Patrizia.


And I could hardly have functioned as a conductor without the able assistance of young hornist Mirko Donninelli, who translated for me with enthusiasm and excellence and who enabled me by week’s end to conduct a rehearsal in Italian, more or less.

More of Italy
Having not visited Italy before, I extended my trip to include research visits to Milan, Varenna, Florence, Rome, and Venice. Traveling on my own, I visited many museums and churches. Images of trumpets and trumpeters may often be found in art from the Renaissance forward, and there is no better place on earth to study the Renaissance than in Italy.

My composition, Italian Postcards for brass quintet (or septet), was composed many years ago, long before I ever set foot on Italian soil. With a trip planned to Italy, it was natural for me to visit the three cities which figure prominently in Italian Postcards: Rome, Venice, and Milan. I am happy to report that all three cities sound just exactly like I composed them! The following are a few of my trip photos.


CODA
In a sense, an experience like this never really ends. I will ponder and reflect on the things I saw and the people I met for many years to come. New friendships will continue. New blooms may grow on this plant which began years ago as a seed in the thought of Mark Lindenbaum. New music is forthcoming that may delight and endure. And so on. I am not the same man who boarded a jet in June to travel to Italy for the first time. I am enriched and blessed. Even the world, if only a little, is a changed and better place.

This blog post, however, must end. I hope my amici, both Americani and Staffolani, will feel free to respond below and keep in touch.